The Spatha X Wireless MMO gaming mouse can connect via 2.4GHz wireless connection or USB 2.0 wired connection. This allows users to easily switch this mouse from one PC to another by connecting one PC via the wireless dongle and another via the USB cord, making it perfect for two PC streaming setup. 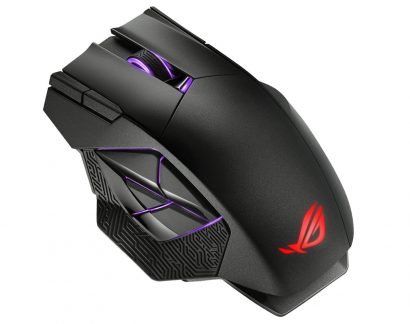 The design of this gaming PC remains the same as the original Spatha gaming mouse, and it features RGB lighting on the palm, mouse wheel, and MMO buttons. Additionally, RGB lighting can be controlled through ASUS RGB lighting software, allowing for further customization of your gaming setup.

It has a highly tuned 19,000 DPI optical sensor that offers a higher level of precision, and this higher precision ensures that during moments of intense action during your gaming sessions. In addition to the optical sensor, it uses the ROG Micro Switch, which has a gold-plated electro-junction, which gives it a lifespan of 70 million clicks to ensure that this gaming mouse does not break down during your next broadcast or gaming session. This new type of microswitch provides a much longer lifespan compared to the Omron microswitch, which has a lifespan of 20 million clicks.

This gaming mouse has fantastic battery life, allows up to 67 hours of playtime on a full charge, or just 15 minutes of charging using the USB Type-C cord, or the charging station can provide up to to 12 hours of wireless playback.

The Spatha X Wireless MMO gaming mouse is slated for release on June 24, and while no official price statements have been made, many have speculated that it will be priced at $ 150!